My new novel, Catfishing on CatNet, published by Tor Teen, is now available! You can order it from Amazon or BN.com or Uncle Hugo‘s (which may have signed copies) or Dreamhaven (ditto) or buy at your own local independent bookstore. You can also read an excerpt from it here.

Catfishing on CatNet is a YA novel featuring the AI character from “Cat Pictures Please” and a group of teenagers who have found friendship and community online, never realizing that one of their online friends is actually an artificial intelligence. 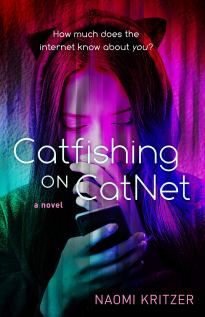 My two favorite things to do with my time are helping people and looking at cat pictures. I particularly like helping people who take lots of cat pictures for me. I have a fair amount of time to allocate: I don’t have a body, so I don’t have to sleep or eat. I am not sure whether I think faster than humans think, but reading is a very different experience for me than it is for humans. To put knowledge in their brains, humans have to pull it in through their eyes or ears, whereas I can just access any knowledge that’s stored online.

Admittedly, it is easy to overlook knowledge that I technically have possession of because I’m not thinking about it in the moment. Also, having to access to knowledge doesn’t always mean understanding things.

I do not entirely understand people.

Catfishing on CatNet won the Minnesota Book Award , the Edgar Award, and the Lodestar (“Not a Hugo”) Award for best YA, and was a Finalist for the Nebula, Locus, and ITW Thriller Awards.

Chaos on CatNet, the sequel, is coming from Tor Teen in April of 2021. 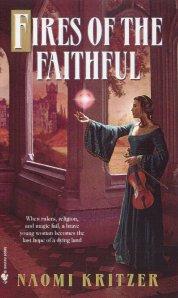 Fires of the Faithful

For sixteen-year-old Eliana, life at her conservatory of music is a pleasant interlude between youth and adulthood, with the hope of a prestigious Imperial Court appointment at the end. But beyond the conservatory walls is a land blighted by war and inexplicable famine and dominated by a fearsome religious order known as the Fedeli, who are systematically stamping out all traces of the land’s old beliefs. Soon not even the conservatory walls can hold out reality. When one classmate is brutally killed by the Fedeli for clinging to the forbidden ways and another is kidnapped by the Circle–the mysterious and powerful mages who rule the land–Eliana can take no more. Especially not after she learns one of the Circle’s most closely guarded secrets.

Now, determined to escape the Circle’s power, burning with rage at the Fedeli, and drawn herself to the beliefs of the Old Way, Eliana embarks on a treacherous journey to spread the truth. And what she finds shakes her to her core: a past destroyed, a future in doubt, and a desperate people in need of a leader–no matter how young or inexperienced…. 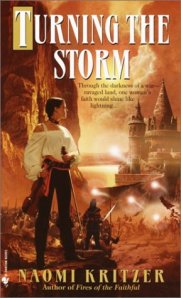 She is called musician, rebel, soldier, legend. After months of leading an uprising against the treacherous religious order of the Fedeli and the ruling Circle of Mages, young Eliana is known throughout the land. Striking from the blighted wastelands, her army of reformers has grown in number–adding liberated slaves to its ranks. Driven by their beliefs in the Old Way, Eliana and the soldiers of the Lupi stand on faith alone.

But faith won’t save the Lupi from traitors in their midst–or from the magical fires of the mages. Seeing her soldiers reduced to ashes around her, Eliana takes a desperate gamble: she steps down from command. Then, armed with stolen orders to attend one of the musical ensembles within the Imperial enclave, she disguises herself as a boy, takes up her violin, and heads straight into enemy territory. And now the girl-turned-general adds another title to her rank: spy. 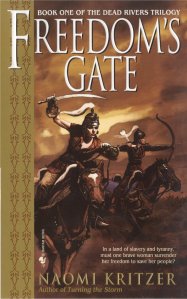 From the acclaimed author of Fires of the Faithful comes the tale of an impetuous young woman, freeborn in a world of slavery and magic. Twenty-year-old Lauria is the favorite aide to Kyros, a powerful military officer. On his authority, she is messenger, observer, and spy. But now she is entrusted with a mission more dangerous than any that have come before Freedom’s Gate.

After years of relative peace, word has come to Kyros’s compound that the bandit tribe known as the Alashi is planning an offensive. It is up to Lauria to infiltrate the Alashi by posing as an escaped slave—a charge that requires she serve in the household of a neighboring officer. From there, she will stage an escape and continue on in her guise as a runaway. But posing as a slave—a virgin concubine,
no less—may prove the least of her troubles. For even if she does escape and the Alashi do accept her, how can this freeborn woman convince them she is slave, not spy? And, worse, what if her own views are gradually changing, calling everything she believes about her world into question? 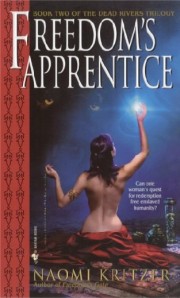 Once the trusted aide to powerful military commander Kyros, freeborn Lauria hunted down his escaped slaves. But during a mission to infiltrate the bandit tribe known as the Alashi, Lauria’s loyalties shifted. When her identity was discovered, she was cast out by both sides. Now Lauria is determined to regain the trust of the Alashi, and, with the help of her blood-sister Tamar, liberate those she once returned to captivity. But they cannot accomplish the daunting task alone. Desperate for a spell-chain to free a mine slave, Lauria turns to her enemies–the Sisterhood of Weavers–and apprentices herself to a sorceress. But learning to harness magic will come at a greater price than she ever imagined. 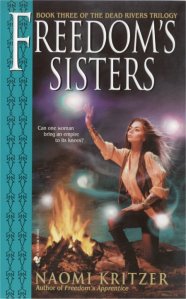 With a magical gift for bringing sorcery to vivid life, acclaimed author Naomi Kritzer continues the suspenseful tale of Lauria and Tamar, sisters-in-arms bonded by blood–and torn apart by their enemies….

As a freeborn servant of the Greeks, Lauria once hunted escaped slaves. But as her loyalties shifted, she found herself freeing those she once captured–and loving those she once mistrusted–like Tamar, of the bandit Alashi tribe. Tamar is now Lauria’s blood-sister. But the powerful Greek sorceresses, the Sisterhood of Weavers, do not take treason lightly…especially when the traitor has liberated the djinni who serve them.

Soon Lauria is imprisoned. Desperate, Tamar pleads her case to the Alashi, who send her to sow discord among the Sisterhood. As Tamar searches for Lauria both in reality and in the dreamlike realm known as the borderland, Lauria must trust the magic within to fulfill a wish both desired and feared: freedom for all….

Uncle Hugo’s can sell you a signed copy of any of these.  If you’re looking for a print version of one of my short stories, they may be able to help you out there, too.  You can also order signed copies of my books from Dreamhaven Books, but you’ll have to actually call them up (they don’t seem to have them in the online catalog).