I first got asked when I was going to write this post in early February of 2019. Fortunately, by virtue of waiting until after Iowa and New Hampshire, I never had to develop an opinion on Andrew Yang more complicated than, “I have always said that the Presidency is not an appropriate entry-level political job, and nothing that’s happened since 2016 has made me reconsider this stance.”

Here’s who’s on the Minnesota ballot, but no longer running:

Andrew Yang
Cory Booker
Deval Patrick
John K. Delaney
Julián Castro
Marianne Williamson
Michael Bennet
As of 2/29, Tom Steyer. (I left my assessment of him below.)
And as of 3/1, Pete Buttigieg (Ditto.)
Holy shit, Amy Klobuchar dropped out on 3/2 (assessment is still below.)

I am not going to write about any of these people. They have dropped out. If you are dead set on voting for one of them anyway, you obviously already have an opinion and thus don’t need mine.

I don’t like Tulsi at all; she’s overly cozy with some seriously creepy dictators, she voted “present” for the Trump impeachment, and there were a few other things that I stopped remembering once it became clear she was definitely not going to be the candidate. She hasn’t qualified for a debate since November and is not remotely a viable candidate at this point, so I’ve mostly stopped thinking about her.

As stated above, I don’t think the presidency is an appropriate entry-level political job. Even (especially) if you’re a billionaire. I’d take Tom Steyer over the other guy who decided to buy his way onto the debate stage, and I’d take him over Trump (obviously) but I’m not impressed by his decision that he has anything other than unique neckties to offer this race. (Note: someone on Twitter corrected me, apparently it’s only one necktie.)

He is the most divisive potential candidate I’ve ever seen. If I absolutely had to vote for him, I would, but I would not volunteer for him. He has, from what I can tell, exactly zero actual volunteers, though he has a shockingly large paid staff. He is a terrible candidate and would be a terrible choice.

(Note: normally I try to be consistent across candidates about first name use or last name use and I’m not doing that this time because I want to use everyone else’s first name and I refuse to call this guy “Mike.” It makes him sound too likable.)

Amy is not going to win the primary but she’s probably going to win in Minnesota. (Polls have shown her leading. She’s fairly popular here, and Minnesotans are deeply loyal to Minnesotans on the national stage, even Minnesotans who refuse to say on camera that Minnesota has the best state fair.)

What I’ve said to my out-of-state friends about Amy’s popularity is that she’s been an absolute master of finding low-hanging legislative fruit and she’s good at constituent services. There are actually worse things to say about potential presidential candidates.

Like, for instance, that they’re an abusive boss. I … kind of shrugged at those revelations, honestly, but then came the Telemundo interview, the one where she couldn’t name the President of Mexico. What I think a lot of people missed from the coverage is that “do you know the name of the Mexican president?” was not whipped out as a gotcha question until she’d missed multiple softball pitches right over the plate. (You can watch the relevant clip here.) The original question was basically, “Welcome to Telemundo; please give us a couple of Mexico-related talking points, ideally with at least some SLIGHT specificity to the current administration in Mexico.” LITERALLY all she could come up with was that she was going to visit Mexico within the first 100 days. And this was an interview on the US Spanish-language TV station. This is absolutely the sort of interview where your prep should include three Mexico-related talking points, at least at a “someone read the Wikipedia entry on current Mexican politics” level, and when you’re running for president, that’s often the sort of thing you rely on your staff for. Her screw-up here made me wonder if she’d just picked the wrong moment to throw a binder at someone, or what?

I tend to think that during primaries, you should feel free to vote your heart, and if you love Amy (plenty of Minnesotans do) then by all means vote for her. If you’re inclined to think at all strategically, and you love someone who doesn’t look like they’re going to come out on top, it’s worth considering what’s likely to happen with their delegates at a contested convention. If it’s a contested convention, I think Amy will back a moderate, unless the consensus moderate is Pete Buttigieg, in which case WHO KNOWS. (It’s hard for me to see her backing Bernie but if it’s Bernie vs. Pete, anything’s possible.) (Edited 3/1 to add: probably not going to happen.)

My biggest concern is that at a contested convention, she’d back Bloomberg if it came to it. I don’t like Pete (for many of the same reasons Amy doesn’t!) but I would, if I had to, take him over Bloomberg. (Edited 3/1 to add: this remains my biggest concern about Amy.) (Edited 3/2 to add HOLY SHIT SHE DROPPED OUT. I was really not expecting her to drop out until Tuesday night, shortly after being declared the winner in Minnesota. She has endorsed Joe Biden.)

So technically Pete meets my requirement of not using the presidency as his first political job.

But the guy’s political experience is that he’s been a basically adequate mayor of a town with 100,000 people. (The lighting thingie he got for their riverfront is very pretty. I approve.) And he’s wildly unpopular with the Black community there because of decisions he made about policing.

He’s also weirdly overrated in a “gosh, white men really are graded on a hell of a curve” kind of way. My hostility towards him is rooted in some of the same resentments as Amy Klobuchar’s, I think: no one who was not a white dude could stroll in after two terms as a mayor of a mid-sized town and be taken seriously as a presidential candidate. It infuriates me that women with decades of experience get shoved aside because a man has just strolled in.

Joe Biden at least brings some genuine experience to the table. He’s not my first choice candidate but he legitimately belongs on the stage. The Never-Trump Republicans were mostly pretty enthusiastic about Biden as of a few months ago, and horrified when Democrats didn’t just make it a coronation, because (a) he’s centrist, (b) he wouldn’t be particularly effective (he’s convinced the Republicans will “come to their senses” if he wins — which is bonus levels of astonishing because he was the Vice President when Mitch McConnell refused to allow hearings on Merrick Garland!) and (c) he seems to them like the safest of all possible candidates.

Clearly none of them read up on his career, because Joe has always had a practically supernatural ability to put his foot in his mouth, paired with a weird talent for nonsensical rambling. It’s honestly hard to tell if it’s getting worse. It’s possible that it just seems like it’s getting worse because we’re paying more attention to him now than back when he was running for VP and saying weird stuff. But there’s also stuff like his out-of-the-blue, never-before-mentioned-even-in-his-memoir claim that he got arrested in South Africa in the 1970s.

I mean in terms of policy proposals I find Joe lacking, but I recognize that some people would prefer to vote for one of the centrists and I wish I could make a solid recommendation here. The thing is, here’s what you’ve got:

Seriously, I don’t know what to tell the “I want to vote for a centrist” crowd other than that a lot of Bernie supporters are convinced that Elizabeth Warren is a centrist, so you could totally vote for Elizabeth Warren, who is a way better candidate than Joe, Amy, Pete, or Tom. (Or, obviously, than Bloomberg, since he’s terrible.)

So here’s the thing about Bernie.

The yelly, finger-waving know-it-all old guy who knows how everything ought to be done but doesn’t actually do any of it is one of the archetypes of my childhood. And I have always found that guy annoying.

Do I like his ideas? Sure. Do I think he’s going to get any of it done? Nope.

On the plus side: Bernie has a volunteer army and is putting it to good use. They recruited a lot of Spanish-speaking volunteers to make phone calls in Nevada, and their overall organization is really impressive, which means he might succeed in winning despite all the people who really don’t want him to. And if he can put his army to work to get people to vote Democratic all the way to the bottom of the ticket, maybe he’s got a shot at accomplishing some of his agenda? (And yes: if Bernie is the nominee, I will volunteer for him. I will volunteer for any of these people except Bloomberg.) (And vote for them, obviously.) 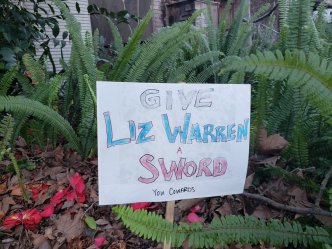 “GIVE LIZ WARREN A SWORD YOU COWARDS.” Photo by Beth Campbell, used with permission.

So, yes, Elizabeth Warren is my pick, and has been for a while, because she doesn’t just have goals, she has plans, and a whole lot of specifics. I like her ideas; I like her vision; I like the way her mind works. I like her. I like that she does selfie lines instead of high-end fundraisers. I like her willingness (and ability) to tear into Bloomberg and I like that a lot of her plans are the result of listening carefully to the people who are most likely to be affected.

Since she’s not currently considered the front-runner, I have put some thought into what might happen with her delegates at a brokered convention, and I have concluded that I am not remotely worried that she’ll throw her delegates to Bloomberg. I think Bernie is the person she’s most likely to back. In a truly weird situation — I’m just going to note that we’ve got a highly contagious virus that mostly kills people over 70 in circulation — she’s someone I’d trust to put the country ahead of her own ambition.

I would really truly love to see Elizabeth Warren as President. I think she’d be amazing. I am excited to vote for her on Super Tuesday.