I was up for a Hugo Award this year, which provided us with a stupendous excuse to take a family vacation in Ireland and Iceland. (Icelandair is both a budget airline and clearly an arm of the Icelandic Bureau of Tourism since they let you arrange a multi-day stopover in Iceland at no extra cost, and inundate you with on-board advertisements designed to sell you on the idea. HORSES! NORTHERN LIGHTS! SCENERY!)

We went over about a week before the convention started. Ed and I visited Ireland 20 years ago — before we had kids — and Dublin was our least favorite bit, so we wanted to get out of it as quickly as possible. We took a train to Cork, where we discovered that the guest house I’d booked thinking it was walking distance from the train station was not around the corner from the train station but straight up a cliff. (There were stairs! I do not recommend hauling a bunch of suitcases up four flights of stairs, in the rain, while massively jet-lagged and operating on almost no sleep. Just, I mean, if you were considering it.)

The rest of the trip went quite a bit better.

After getting a good night’s sleep in Cork, we rented a car from a rental agency next door to the train station and drove to Blarney Castle. (I did all the driving in Ireland. Ed navigated.) Molly thought the idea of a cool castle that came with a superstition would be a fun place to visit, and both girls wound up kissing the Blarney Stone. Probably our favorite bit of Blarney Castle was the poison garden and the weird, enormous trees growing around the grounds. When we were done there, we drove up to Killarney.

By chance, there was a festival happening near Killarney during the time we were there, the Puck Fair, which is an event that’s been happening in Killorglin for at least 400 years.

This person’s tweet sums up the festival really well:

It's Puck weekend, marking the ancient Kerry tradition of making a goat king of a village, giving him a child bride, and forcing him to listen to Irish country music for three days 🐐 pic.twitter.com/gnzHtvY4Tf

King Puck is an actual mountain goat, not a domestic goat; they catch him in Killarney National Park and release him at the end of the festival. The Queen of Puck Fair is a young girl who writes a persuasive essay about why she deserves this honor. There’s a plaque on your way into town explaining the whole festival: 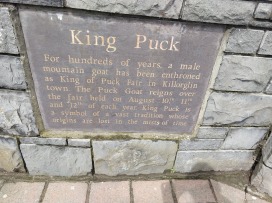 I sent a copy of this sign to my friend Lyda with the comment, “that’s a lot of words to engrave on a sign in place of ‘probably pagan.'”

Anyway, Puck Fair had lots of music, an Irish dance workshop that Molly wanted to go to (I took her and wound up getting drafted to dance because there was an odd number), vendors selling crafts, vendors selling used tools and farm stuff, and rides. When we were done, we headed towards the sea for a restaurant that looked like it might have a nice view. 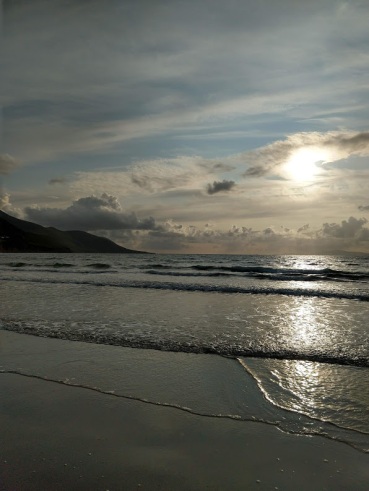 County Kerry is stunningly beautiful in a way that’s shockingly easy to capture. I’m not a very good photographer, just to be clear; also, my camera is a mediocre smartphone camera. County Kerry makes my photos look good, like its county-wide superpower is “looking amazingly good in photos.”

The beach was also pleasant to walk along. We all shed our shoes and waded in the surf and walked for a while and admired the scenery and took pictures. Then we went back to the car and drove a little further down the beach to another spot, which was also absolutely stunningly gorgeous: 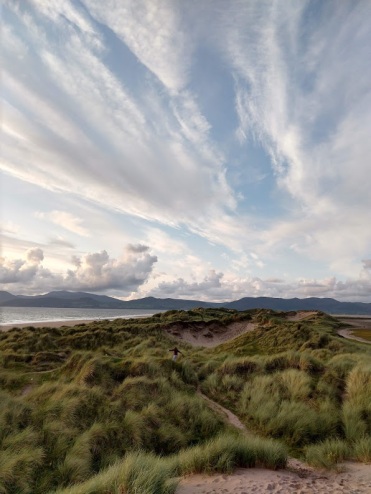 Seriously, my pictures never come out this well.

The next day, Kiera requested that we climb a mountain as our activity, so we went to Killarney National Park. There’s a path up Torc Mountain, which was also absolutely gorgeous although a confusing pain in the ass to find. The final path up was very straightforward — it was carefully-built steps and switchbacks and boardwalks leading up to the summit of the mountain. Getting to the bottom of that path was a lot more tricky, not least because Killarney had some signs up with trails and none of them were the trail we needed. You’d think that, having gone to all the trouble of building this lovely trail to the top of a mountain, there’d be some signage helping you find it, but nope. Ed had a web page pulled up describing the hiking route, which is how we found it, but not without a bunch of confusion, some backtracking, and at least one argument. While in the really confusing bit, we ran into two nice young women who were not dressed or equipped for any sort of long hike who were just trying to figure out how to get back to their car, so I don’t think we’re the only ones who’d have appreciated some better signage.

Anyway, once again, the scenery was glorious. 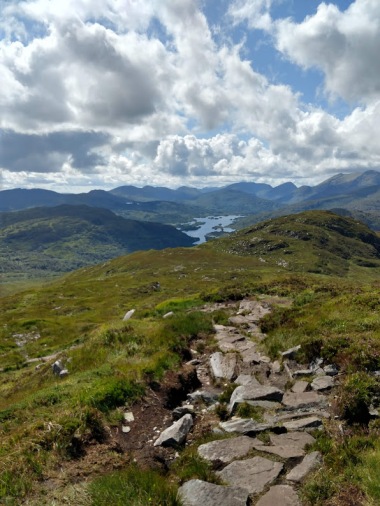 We were really lucky on the hike — if the skies had opened before we started to the top we’d have had to turn back, I think. At one point it started to rain but never did more than a light spatter (convincing enough that we all put our rain coats on) and then stopped.

We were mostly (if not entirely) pretty fortunate with our weather — the day we flew in, there was some absolutely torrential rain on the train ride, but we were on a train, watching it out the window (or sleeping through it). It rained on us while we were trying to get to the guest house but it was, at that point, a light rain.

The next day we visited Muckross House, which was a fancy 19th-century house with furnished rooms and an interesting history, and then the Muckross farms, which were a set of period farms you could visit, with low-key living history, free snacks, and animals you could pet (including some pretty recently born piglets).

One of the ways to see the Killarney scenery is by “jaunting cart,” which is a little cart pulled by a horse with a driver. We tried to see one of the particularly famous views by jaunting cart but that was the other time we were not fortunate with our weather — it was drizzling as we set off and got steadily worse while we were out, and we couldn’t see much of the scenery we’d come for as the clouds were so low.

The next day we drove back to Cork and spent a bit of time in Cork, visiting the English Market (a covered market of food stalls that’s beloved by local food geeks) and checking back in to the same guest house we’d stayed in that first night. In the morning, we DROVE our bags back down the hill, then returned the car and took the train back to Dublin for WorldCon.

Driving in Ireland was an interesting challenge. There’s the whole “left side of the road” thing, first of all, but also, the roads are frequently very narrow and parking stalls are tiny. I spent a lot of time driving 60 km/h on stretches marked 80 km/h because I was pretty sure if I tried to go any faster I’d get us all killed. I was really surprised that no one tailgated me — I did pull over when I saw the opportunity to do so but sometimes that took a while. I mentioned this to a couple different Irish people at the WorldCon. The woman who lived in Dublin was genuinely startled, then felt mildly bad for being so dubious about something nice being said about her country, but said I must have just been lucky. The woman who lived in Cork was scandalized that I would expect to be tailgated (“that would be rude“) and added that there’s a sticker on rental cars that lets everyone know you’re a tourist so people keep their distance because they feel sorry for you.